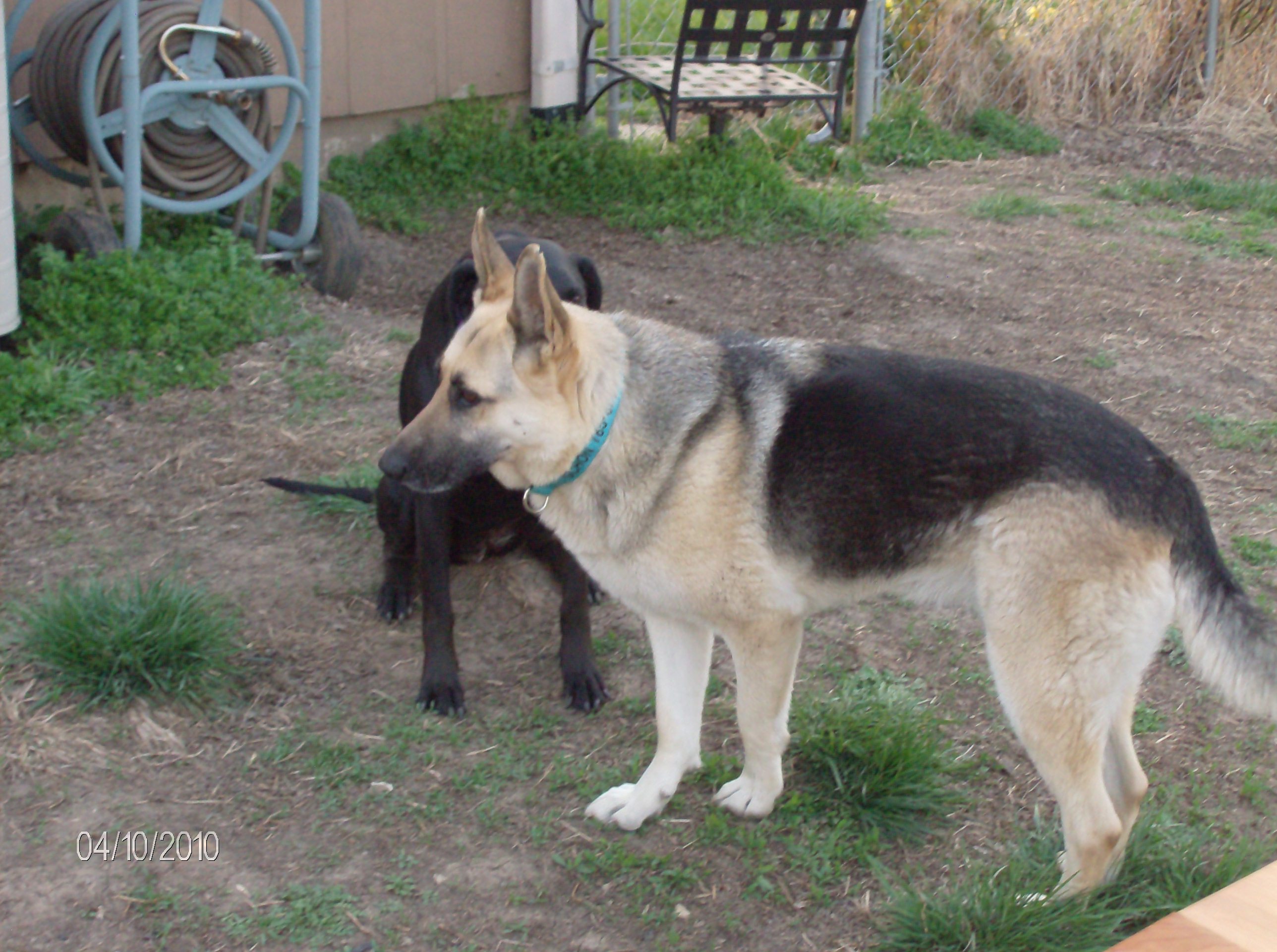 A Tribute to Schön


One night at Fergie's bar in the College Hill area of Topeka, I saw the most beautiful small German Shepherd dog running around, loose and with no collar or tags.  She was skinny as hell, and stunk to high heaven, but I wanted to take her home.  I asked my girlfriend at the time if we could take her home.  She said if the dog was still there at the end of the night, we could take her home.  I tied her to a tree out front to make sure she was still there ;-)     On the ride home, I was second guessing my decision.  The odor in the car was so bad, we had to stop halfway home to let me out to puke.  She was just that retched smelling.  But I managed to breath through my mouth and get her the rest of the way home.  She went in the outdoor pen for the night, and barked and howled all night.  The next morning, she came in the house and went directly to the bathtub.  After scrubbing her with a lot of soap and shampoo and drying her off, I realized that I had a very beautiful, black and silver shepherd.  As she got older, the silvery color turned more to tan.  She was small, but I thought she would get bigger.  She never did and remained on the small side, reaching maybe 60 lbs at her heaviest.


She fit in well with the pack, and became fast friends with my other Shepherd Phoebe, and got along well with Molly and Sally.  When Senshi came along, they became fast friends as well, and often played together and chased each other around the yard.  Like a typical German Shepherd Dog, Schön liked to patrol the yard, and soon wore a path around the perimeter of the yard.  If something moved, she would be the first to notice it and go investigate.

Schön became known as the "referee," and later as the "hunter."  She would referee the play fights between dogs by getting right between them and barking to high heaven.  She would spin around and nip at them until they stopped their play fights.  She usually was not aggressive, but one time while we were away, Pheobe and Schön got into their pack mentality and decided to pick on Molly, who would never hurt a flea.  They ripped her up pretty badly, and were kept separated when unsupervised thereafter.

Later, she started hunting Senshi when we would be out mowing the lawn.  She would get in the hunter's crouch and start sneaking up on Senshi, eventually bounding towards her at top speed.  Senshi always stood her ground, so Schön would just run up on her and try to get her to play.  As Senshi got older and did not want to play, Schön continued to hunt her, just for the sport of it.  Schön also liked the water, and would frequently retire to the pond for a cool dip after a long hunting session.  When she stayed in the house, we noticed that she groaned and moaned a lot.  We often called her "groany, moany Schönie.

Around September 2010, we noticed that she was dragging the tops of her back feet when she ran.  A trip to the vet confirmed that she had a disease of the spine called Degenerative Myelopathy, a disease common in German Shepherd Dogs and which causes symptoms similar to Muscular Distrophy in humans.  We were told that the condition was not painful, but would progress to immobilizing Schön's back legs, then her front legs and eventually total paralysis.   Loss of bowel and urine control would come near the end as well.  We ordered her a cart to help with her mobility, but by the time it arrived in February 2011, she did not like using it much and preferred dragging her back legs behind her.  In late February, she was almost immobile and started becoming incontinent, so we made the extremely difficult decision to euthanize her.

Schön gave us nine and a half years of smiles, love and affection, and I'm glad we could provide her a good home.  She will be sorely missed.